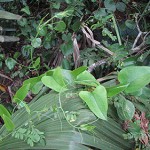 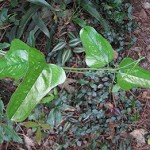 Greenbrier, Catbrier, Horsebrier, Smilax from the family Smilacaceae is edible. Not just edible for my rabbits, it is also edible for me. Better than edible it tastes great. I have heard it called wild asparagus, and I have found pieces so vigorous and large that they resembled asparagus tips a little. Like asparagus the part of the Greenbrier that you can eat is the tender new growth at the tips, including the tendrils. Unlike Asparagus this plant grows itself in my poorest soil and doesn’t require any nurturing from me.

Greenbrier is a thorny vine native to a great deal of this country including all of Florida. It’s berries are eaten by many birds including Blue Jays, Mockingbirds, Robins, Wood Peckers, and Wild Turkeys. It grows wild in my woods and is very vigorous. I never liked it before and have had to work very hard to keep it out of the landscaped areas around my house. It is glad to climb on in from the woods. When pulled it breaks off. I dug it out with a pickax. The root is a giant hard potato sized thing that can just keeps on trailing under ground making more of itself along the way. I have dug out many pounds of those roots at a time, and I always wondered at their size and whether they were useful for something. They are as hard as wood. Above the ground the vine grows up into trees and then at the top grows lots of stems and leaves curling its tendrils around branches to hold itself aloft.

Now that I find it to be useful my approach to controlling it is different. Oh I still cut it out of the trees, but I don’t worry about getting it out of the ground, and when I cut it down out of the tree I eat the tips. I am also grooming it now with production of new tips in mind.

Right now in March and going into April I see the Greenbrier is surging forth after a winter of little or no new growth. Everywhere I go I see the lime green of it’s new tips surging towards the sun.

I have eaten quite a bit of it lately. It has not so far disturbed my stomach. I googled Greenbrier and found it is not poisonous. I have also looked into how it was used medicinally. It doesn’t look like anyone used it as a purgative, mostly the leaves were used on boils, gals and scratches, and to help expel afterbirth. I also read of the root being used as food, but it is so woody I don’t know how.

If you are keeping some wild areas in your Florida landscape you probably have some Greenbrier too. Take a look around, snap off the tender new growth and give it a try. I think you will like it.
Bon Appetit.