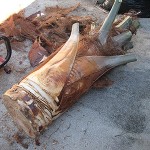 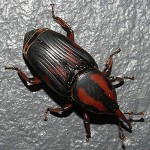 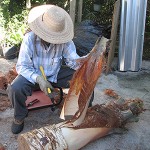 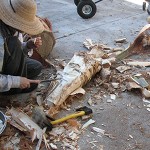 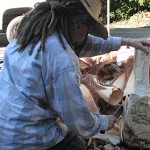 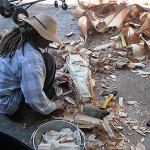 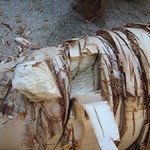 "White But Too Pithy" 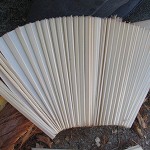 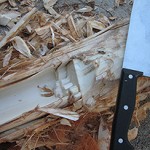 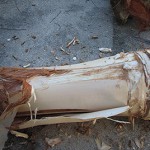 "Premature Boots Above The Heart"

"The First Pieces In The Bowl"

Over the course of this year we have had the good fortune to harvest and eat swamp cabbage, or the heart of the Sabal Palm three different times. The first tree fell casualty to our new shed. We had to do some clearing to get the shed in. That was the only tree other than some Brazilian Pepper Trees to be knocked over. The Brazilian Pepper trees are invasive non native trees. It was a great thing to knock them down.

I was interested to find that the Sabal or Cabbage Palm we took out had lost all of it’s boots and was smooth trunked, or as smooth as one can get. When I opened it up I found large black and red Palm Weevil beetles moving in around the boots at the top, and there were beetle larva in the white new boot growth of the interior. Over time they would have killed my palm, but the top was still green, and the heart of the palm was not yet damaged. This Palm tree was in the woods, and had never been pruned properly or improperly. I do worry that if the weevils were attacking it there was some weakness already there. The University of Florida has a recently discovered a palm bacterium that is attacking and killing the Sabal Palms here. It is the phytoplasma that has been causing the lethal yellowing disease in Canary Island Date Palms, Wild Date Palms and Queen Palms. I hope it is not ongoing in my palms. I haven’t yet contacted anyone about a test. New Sabal Palms come up on my property quickly and constantly. I am for now taking a watch and see attitude. I lost a pair of vigorous Queen Palms several years ago, but there was no yellowing first, they both just lost their centers and slowly died.

The second palm I harvested the heart from was up at the road in front of a neighbor’s house waiting to be picked up by waste removal services. My husband and I saw it there while walking the dogs, and hightailed it back to the house to get the truck and a hand saw. When we returned to the tree we cut the top fronds off, and loaded it up into the truck.

The last Cabbage Palm I harvested this year came off of my property. It was blocking the western exposure for several of my garden boxes. It was a young tree, maybe about 10′ high, not far from two others about the same size.

Harvesting Cabbage Palm hearts is not what anyone would call a sustainable practice, but if you have to take one out it is a good idea to plan to get the food out of it. If you don’t run into a Sabal Palm that has to be sacrificed you can also find it in the grocery store in the canned vegetable section. Even that harvest though is unsustainable, so I would call Palm Hearts a specialty occasion food only.

Even with the sharpest hatchet, the harvest process takes me over 4 hours. By the third harvest my time had not appreciably improved. This harvest is hard work, but when you get that big smooth cylinder of meat out of there it all seems worth the trouble. As I am chunking it out I save the edible parts in distilled water with a lot of lemon juice. That seems to keep it from browning. That is also how I store it in the refrigerator until I can use it. It is good like that for at least five days with a water/lemon juice change in between.

The Palm heart has a pleasant smooth crunchy texture and almost no flavor. As it goes down toward the more pithy inedible parts it gets bitter. I ate a good bit of that bitter part raw while working on it. It’s not bad while it is fresh! I used the rest of the harvest to make stir fry, added it raw to salad, and cooked up a bunch in a stew, most of which I froze for another day. All the other parts went into my compost.

The Sabal Palm is the State Tree for Florida and South Carolina. Indigenous people used the leaves for thatch roofing, the heart for food and chewed the berries for a headache remedy. It is a native plant in much of the south, drought tolerant, cold hardy and low maintenance.