This is an excellent article from the Cornell Waste Management Web Site.
I don’t know about you, but it makes me want to run right out and see how many of these invertebrates I can find in my compost heap.

Invertebrates of the Compost Pile
Written by Nancy Trautmann, Cornell Center for the Environment

In small-scale outdoor composting systems, such as backyard compost piles, soil invertebrates are likely to contribute to the decomposition process. Together with bacteria, fungi, and other microbes, these organisms make up a complex food web or energy pyramid with primary, secondary, and tertiary level consumers. The base of the pyramid, or energy source, is made up of organic matter including plant and animal residues.

Organic residues such leaves or other plant materials are eaten by some types of invertebrates such as millipedes, sow bugs, snails and slugs. These invertebrates shred the plant materials, creating more surface area for action by fungi, bacteria, and actinomycetes (a group of organisms intermediate between bacteria and true fungi), which are in turn eaten by organisms such as mites and springtails.

Many kinds of worms, including earthworms, nematodes, red worms and potworms eat decaying vegetation and microbes and excrete organic compounds that enrich compost. Their tunneling aerates the compost, and their feeding increases the surface area of organic matter for microbes to act upon. As each decomposer dies or excretes, more food is added to web for other decomposers.

Nematodes: These tiny, cylindrical, often transparent microscopic worms are the most abundant of the physical decomposers – a handful of decaying compost contains several million. It has been estimated that one rotting apple contains 90,000. Under a magnifying lens they resemble fine human hair.

Some species scavenge on decaying vegetation, some feed on bacteria, fungi, protozoa and other nematodes, and some suck the juices of plant roots, especially root vegetables.

Mites: Mites are the second most common invertebrate found in compost. They have eight leg-like jointed appendages. Some can be seen with the naked eye and others are microscopic. Some can be seen hitching rides on the back of other faster moving invertebrates such as sowbugs, millipedes and beetles. Some scavenge on leaves, rotten wood, and other organic debris. Some species eat fungi, yet others are predators and feed on nematodes, eggs, insect larvae and other mites and springtails. Some are both free living and parasitic. One very common compost mite is globular in appearance, with bristling hairs on its back and red-orange in color.

Springtails: Springtails are extremely numerous in compost. They are very small wingless insects and can be distinguished by their ability to jump when disturbed. They run in and around the particles in the compost and have a small spring-like structure under the belly that catapults them into the air when the spring catch is triggered. They chew on decomposing plants, pollen, grains, and fungi. They also eat nematodes and droppings of other arthropods and then meticulously clean themselves after feeding.

Earthworms: Earthworms do the lion’s share of the decomposition work among the larger compost organisms. They are constantly tunneling and feeding on dead plants and decaying insects during the daylight hours. Their tunneling aerates the compost and enables water, nutrients and oxygen to filter down. “As soil or organic matter is passed through an earthworm’s digestive system, it is broken up and neutralized by secretions of calcium carbonate from calciferous glands near the worm’s gizzard. Once in the gizzard, material is finely ground prior to digestion. Digestive intestinal juices rich in hormones, enzymes, and other fermenting substances continue the breakdown process. The matter passes out of the worm’s body in the form of casts, which are the richest and finest quality of all humus material. Fresh casts are markedly higher in bacteria, organic material, and available nitrogen, calcium, magnesium, phosphorus and potassium than soil itself.” (Rodale)

Slugs and snails (left): Slugs and snails generally feed on living plant material but will attack fresh garbage and plant debris and will therefore appear in the compost heap.

Millipedes: They are slower and more cylindrical than centipedes and have two pairs of appendages on each body segment. They feed mainly on decaying plant tissue but will eat insect carcasses and excrement.

Sow Bugs (right): Sow Bugs are fat bodied crustaceans with delicate plate-like gills along the lower surface of their abdomens which must be kept moist. They move slowly grazing on decaying vegetation.

Ants: Ants feed on aphid honey-dew, fungi, seeds, sweets, scraps, other insects and sometimes other ants. Compost provides some of these foods and it also provides shelter for nests and hills. Ants may benefit the compost heap by moving minerals especially phosphorus and potassium around by bringing fungi and other organisms into their nests.

Flies: During the early stages of the composting process, flies provide ideal airborne transportation for bacteria on their way to the pile. Flies spend their larval phase in compost as maggots, which do not survive thermophilic temperatures. Adults feed upon organic vegetation.

Spiders: Spiders feed on insects and other small invertebrates.

Pseudoscorpions: Pseudoscorpions are predators which seize victims with their visible front claws, then inject poison from glands located at the tips of the claws. Prey include minute nematode worms, mites, larvae, and small earthworms. 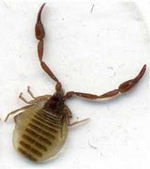 Earwigs: Earwigs are large predators, easily seen with the naked eye. They move about quickly. Some are predators. Others feed chiefly on decayed vegetation.