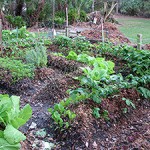 The Vegetable Garden Next Door 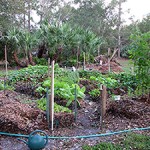 The Vegetable Garden Next Door December 2009 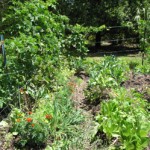 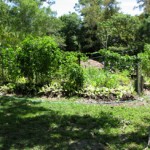 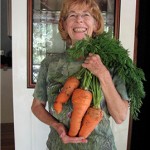 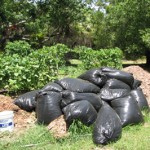 To get the full impact of the story of my Neighbors’ Fabulous Garden it is necessary to go back in time at least several years.
By the time this story takes place we have been living next door a long time, and are close friends with our neighbors.
We are both intense gardeners. As soon as my husband and I moved in my neighbor was passing through with plant offerings for my new gardens. It was great living next door to a gardener and we both felt the same way about it. Before any thing else we had our gardens in common.

Before settling in Florida our neighbors (JoEllen and Harold) had come from Ohio where they had both grown up on farms and farm land, but by the time we met they had stopped trying to grow their own vegetables here in Florida.

A few years after we moved in Harold and JoEllen started growing food again. In a few more years they had a large full sun garden about 900 square feet (about 275 square meters). They grew some nice food but they were not growing organically. It wasn’t that important to them, so if there were caterpillars on their squash or bean plants they might sprinkle a synthetic pesticide dust on the leaves, and when the plants needed feeding they used use a synthetic plant food, and they didn’t mulch or feed the soil.

Two years ago in the summer before they left town for a vacation Harold turned the bed four times wetting it each time, then he covered it over with a heavy mill clear plastic sheeting. He was solarizing the soil in order to destroy the nematodes that were infesting the roots of their tomato plants. Their plan was to manure the garden when they came home in the fall after solarizing the soil. After six weeks in the sun the plastic had developed many parallel splits, and the splits were beginning to be intersected by new splits and my neighbors were still months from returning. I called them and suggested I remove the plastic for them and they agreed it was a good idea. After picking up the plastic I knew I couldn’t just leave that garden for the weeds to creep in and take over, and it was a slow summer for me so in my spare time I carried over buckets of manure and carbonaceous wastes, like the bunny cage scrapings, old hay, and all of the leaves I scrounged in the neighborhood and leaves I found mulching around their property, and I dumped it all on their garden. When they came home they added another cart of manure, covered it all in a few inches of soil and grew a great garden. They didn’t have to fertilize that year. but they still used the synthetic pesticide powder on the garden against caterpillars.

When their growing season was over they covered it all over with leaves and manure they had been collecting for themselves, and left town. They had collected so many leaves during the growing season that they had enough to leave full the leaf fence going around the garden.

There hadn’t been much rain that summer while they were away, and when they came back in the fall the leaves were not entirely broken down. JoEllen raked that partially decomposed compost up into knee high mounds with slim walkways between and planted into them. They brought in another load of stable scrapings and JoEllen side dressed the mounds as the plants grew. As she began thinning plants she moved them down into the sides of the mounds. She planted her tomatoes into the composted leaves in the leaf fence going around the outside of the garden. Unlike the year before they did not bother to buy any soil to put on top of the compost mounds. They simply dropped their seeds into the mounds of compost.

Last weekend JoEllen harvested buckets of onions. Except for the marigolds that remain they were the last of an exhausting season of growing and harvesting in that garden that included lettuce, tomatoes, (huge) carrots, beans, squash, potatoes, broccoli, Chinese greens, edible flowers, and herbs, and of course those buckets of onions.

It is June, the garden has been covered over with a new crop of leaves. The mounds remain beneath undisturbed, with the marigolds still growing there. Outside of the garden another pile of shreds, leaves, and the remains of a manure pile have been raked into a knee high rectangle that will extend the garden farther out into the field for a strawberry patch or corn. This last season JoEllen bought Thuricide Bt to use against the caterpillars on her plants instead of the synthetic pesticide, and of course she never needed to fertilize the garden. They did not bring in any more manure this summer. The mounds posses all of the microorganisms and invertebrates needed to turn those leaves into compost over the summer without any help from manure. When she returns she will simply rake the pathways up into the mounds and begin again.

Believe it or not this speedy transformation in growing practices didn’t happen because I was pushing for it. It happened because what I was saying about growing in compost made sense, it put them in mind of the year that Harold’s father came to Florida to visit and planted potatoes in old stable wastes (old hay, straw, and composting manure). They remembered it was a potato harvest to end all others. What I was saying to them, and what I was doing in my garden was reminiscent of information they already possessed from an earlier time in their lives. They only needed to be reminded.

What I learned from watching my neighbors’ garden this year was that the mounds of organic materials that you grow into don’t have to be entirely broken down before you plant into them. You may also notice that the mounds you grow into don’t have to be specific materials or specially arranged or measured either. This is also a great example of Direct To Garden Composting rather than building a compost pile and then bringing the compost to the garden.

My neighbors grow in compost not because it is the organic or no till or healthy thing to do. They grow this way because it fosters the most vigorous plant growth and the most flavorful vegetables, in a place that once seemed much less hospitable for growing food.

Here in South Florida an organic no till garden is the easiest way to grow healthy and delicious vegetables for your table.