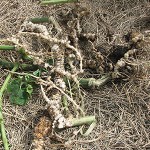 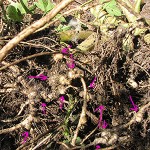 In the garden nematodes can be a blessing or a curse. Nematodes in compost are voracious eaters in natures great cafeteria. They consume bacteria and other invertebrates in the compost pile and help to prepare nitrogen for plant consumption. Compost nematodes also consume plant nematodes when they are together in soil. Plant nematodes are garden pests and a problem for many southern growers.

Plant nematodes can be a real problem here in South Florida where our soil is sandy and calcareous. They invade plants roots growing there and creating blockages that are visible as growths called galls and are described as root knots. Root knot nematodes get in the way of healthy root function and can multiply in soil until they eventually destroy a crop. In the first year of your vegetable garden they won’t be there, but once vegetables have grown in your soil nematodes will be there. Some growers fumigate their soil with something that kills them. That’s not an organic solution. Other people solarize their soil. That is an organic solution, but it is necessary to turn the soil several times before covering it exposing soil to oxygen which releases nutrients and depletes the soil, and solarizing kills many organisms in the soil, not just plant nematodes.

Soil that is rich in organic materials is less hospitable to plant nematodes and is an organic gardeners best defense against nematode infections. Rotating crop families is another important and effective defense against nematodes as well as other crop predators. Not all of the crops we grow are affected by nematodes. So rotating unaffected plants with plants that are susceptible is a prudent practice. Mustard greens are a resistant crop and planted in rotations with strawberries will help destroy the nematodes that would otherwise parasitize the strawberries. Some plants like collard greens may have some root knots showing after a full season of growth, but still produce lots of large delicious leaves. Most leafy green vegetables don’t seem to struggle with nematodes, and plants in the brassica family will generally help to reduce nematode populations in the soil. Some like oil radish, and rapeseed, can be planted as a green mulch and folded into the soil. When left in the soil to decompose during solarizing, or while the soil is fallow, brassicas are especially helpful in diminishing nematode populations in soil.

Sesame is grown in rotations with peanuts, cotton and soy by Alabama farmers. Sesame is one of many plants that produce allelochemicals that function as nematode antagonists. Sesame oil and sesame cake are both sold as nematicides. You can find a sesame oil product called Dragon Fire at Arbico Organics. Neem cake, the cake left over after the neem oil is squeezed from the neem seeds can be mixed with soil to destroy nematodes. There are many other plants that produce chemicals that are used in organic nematicides including herbs like fennel, apple mint and spearmint.

Sunflowers, tomatoes, potatoes, squash, and cucumbers will get nematodes, and once in your soil they will multiply. Repeating these crops in the same soil in consecutive seasons is a mistake. My friend Larry told me his okra had lots of root knot. When I inspected mine I found the same was true in my garden. Once I cut down the okra plants I am going to remove the infected roots from the garden and I will grow mustard greens and lettuce there along with some onions. Usually I leave finished crops’ roots in the soil to decompose, but this time and for now I take out the roots that are infested with nematodes and put them in a separate compost pile. I am on the fence about this practice. I reason that if soil organisms present during composting destroy plant nematodes then perhaps leaving the roots in the soil to break down does not necessarily ensure the survival of the nematodes once composting organisms get to the rotting roots.

Some marigolds attract nematodes to themselves. Those marigolds once mature are removed from the garden to remove the nematodes they attracted. French Marigolds and African Marigolds which are common ornamental marigolds repel nematodes. Gardeners will plant them here and there throughout the garden, or rotate a whole season of marigolds in each bed where crops are grown alternately. Gaillardia pulchella, or Blanket Flower planted in the garden will help to repel nematodes as will Chrysanthemum and Black Eye Susan. These flowers can be effective against some plant parasitizing nematodes and not against others. Grasses don’t attract nematodes and so make an effective rotation after nematode attracting plants, and can be used as bio mass (organic matter) for the soil once you’re ready to compost, and replant. Some South Texas farmers found that certain high yield soy bean cultivars were resistant to nematodes and made effective rotations with cotton.

I think it is important to point out that the roots of beans and peas will get nodes on them that should not be confused with root knots. Those nodes are nitrogen storage for legumes and can be easily differentiated from root knot because nodes can be easily flicked off of the roots of legumes, and often come off in the soil if those plants are pulled out of the ground. Nodes on legumes’ roots are desirable as they add nitrogen to the soil once they decompose. Root knot is generated from inside the roots of plants, and can not be detached from the root like nitrogen nodes can.

There are more natural solutions to nematode problems in the vegetable garden than there are plant parasitizing nematodes. This ATTRA web page on nematodes is my favorite place for learning and resources on this issue. There you will find myriad solutions to nematode infestations as well as many preventative measures from which to choose.