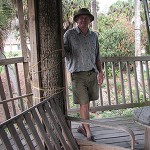 John Up In The Tree House 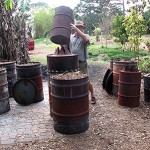 John Placing The After Burner On Top 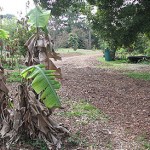 Looking Down The Driveway

I met John Rogers at Susana Lein’s Permaculture class at Heathcote Botanical Gardens in February 2011. He was already acquainted with Susana from having attended permaculture conferences with her. We were invited to visit his garden in Melbourne Florida and several other small farms and gardens nearby. John was in the process of transforming his land from a bamboo forest into a sustainable food forest.

I had heard of John in the past. Though his place is more than an hour north of my town he was well known by gardeners for his bamboo collection.

When Susana and I visited his place he was well into the process of changing his once bamboo forest to a food forest, and he was using some permaculture practices to do it. Not all of the bamboo was gone. I saw several specimens still in the landscape, but throughout there were mounds, many of which were planted with fruit trees. Mounds that did not have trees planted in them had ponds sunken into them. The ponds were fed by the rain run off from the roof of his house. Two inch pipes connected to the down spouts just below the gutters, and ran down the side of the house, and into the ground until they surfaced at the ponds they fed. There were also several circles of Sabal Palms (Sabal palmetto) planted around the property. One of the palm circles supports a tree house structure. John said he plans to use the other palm circles the same way and will eventually connect them by elevated walkways. He had the Palm circles planted there.

John wrote to me about the development of his bamboo collection turned forest garden. He said, “Years ago I needed to landscape my newly purchased house in Melbourne and decided that an edible / useful theme was the way to go. Soon I had become active in the Brevard Rare Fruit Council and started to learn about tropical and sub tropical trees and shrubs.

But later, bamboo came along and caused a ten year distraction from my earlier plans. And during my bamboo affair, I moved a block away to my current two acre property and eventually had most of it covered by forty varieties of clumping bamboos. I am in the process of replanting a forest garden where much of the bamboo used to be. I am of course, keeping my favorite species of bamboo.

I am concentrating on perennials to get the structure of the garden planted. Annuals can be added between these trees and shrubs. Besides food, most of the plants provide privacy, wind breaks or cold protection for more tender neighboring plants. Seedling avocados are being planted throughout in an effort to find strains that do not succumb to laurel wilt. And pretty much any subtropical fruit tree is part of the collection–mango, carambola, lychee, longan, canistel, atemoya, sugar apple, custard apple, white sapote, black sapote, tamarind, jujube, jackfruit, moringa, rose apple, monstera deliciosa, cassava, miracle fruit, papaya, banana, low chill peach, pecan, and mulberry.”

John connected with land clearing companies, and tree pruning companies to get their waste products. Though he uses a great deal of the shredded wood he gets from the tree pruning company to mulch his mounds, he also uses it to create bio char, which he puts beneath the mulch on the mounds. His bio-char operation is very interesting. John uses home made kilns or gasifiers he made out of metal drums. The burn drum itself is a 55 gallon drum with no top, and pinky finger sized holes (about 1/2″) punched into the bottom. He makes a chimney that fits atop the 55 gallon drum, and then a smaller afterburner chimney that tops the first chimney. All of this sits on a paving stone patio. The grooved or beveled spaces between the paving stones permit the right amount of air to get beneath the burn drum. Once the chimneys are added the fire takes about an hour to char the wood chips inside. When ready the volume of the once full drum has diminished by nearly two thirds. Here is a youtube link to a video of John firing up his kilns to make bio char.

Bio Char or Terra Preta de Indio, is soil made from carbonized wood. Carbonized wood is partially burnt, not yet ash, it is brittle, porous and capable of absorbing moisture and soil organisms. It is also an effective long term carbon trap. It is believed that the Terra Preta de Indio soil in South America and Brazil is a result of slash and char rather than slash and burn land clearing. It is not clear whether this was done purposely to support agriculture, but it is believed that the pre-columbian people who lived there farmed in that soil. The Terra Preta soil is still extremely and deeply fertile hundreds of years after it was abandoned. You can find an article about Bio Char on Cornell University’s web site.

I found my visit to John Roger’s young forest garden very informative, inspiring, and interesting. His property is not just becoming useful and fruitful it is also quite beautiful.