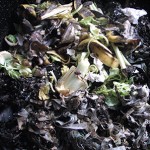 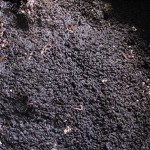 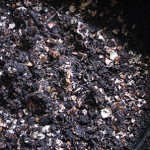 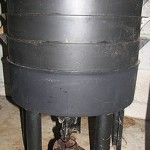 I was at an EcoGrowers of East Central Florida pot luck dinner the other nite. Our host Christine was showing her new worm bin projects. She has two of the cutest worm bins. I got very excited. I knew I had found the right group. I keep worms and haven’t met many others people who do as well. We were discussing the order of the trays, and I promised I would post a blog about my bin, and the way that I feed the worms for others who might be interested.

The worm bin I have is called the Can-O-Worms. It was made in Australia of 100% recycled plastic.
I was attending a wedding in Colorado in ’91 when I saw the Can O Worms bin in a garden store. I was very impressed and took a brochure. Five years later I dug up the brochure and ordered my Can O Worms composter.

This bin, like the ones Christine has is a stacking affair with 3 working trays and a reservoir at the bottom with a spigot for draining off the fluids more commonly known as Worm Tea.
Worm Tea is a fabulous manure tea supplement for plants and it is a byproduct of worm composting. It not only feeds plants, it also contains microbes that will help fight aphids, scale, and mealy bugs when sprayed on infected leaves.

It is important that if you are fashioning your own worm composting bin you create a way to drain off the fluids that will collect in the bottom. Vegetable wastes are about 80% water. That water has to go somewhere. I leave my spigot open all of the time and keep an eye on the jug beneath it. I empty it every few days to make sure it doesn’t over fill. I also pour water into my bin at least once a week. The reservoir section has a hump that reaches up to the next tray so that the worms that go down for a swim can climb up and out of the water and back into the bedding trays.

When you get your bin it will likely come with a block of coconut coir which is the compressed fiber from the outside of coconuts. Get at least 1000 compost worms. Earthworms will not do. The worms I bought are called Red Wigglers. There are several worm farmers in the U.S. My worms were shipped to me from Arizona. It was summertime when I ordered them. The postman put the box of worms in my mailbox where it sat all day. When I found it there it was a smelly mostly cooked affair. The worm farmer sent another box at his expense, and the postman delivered that box to the door. The worm farmer was a prince! He stood behind his worms even though he understood that they sat in my mailbox all afternoon.

Soak the coconut coir in water. It will take about 15 minutes to soak up enough water. Break it up onto a piece of cardboard in the first tray above the water reservoir. The worms go in on top of the wet coir. The cardboard will help keep the coir from falling through the tray’s holes into the reservoir. Leave the other two trays off, and leave the lid off until the worms dive into the coir. They don’t like the light and leaving the lid off for a bit will encourage them to go down. Once they have gone down into the coir cover that layer with some wet newspaper shreds. The newspaper shreds will help keep the tray dark and moist, and the worms will eventually eat the newspaper. The worms will begin to eat the coconut fiber. If the bedding comes up high enough to touch the bottom of the next tray then put the next tray on and put some of your kitchen wastes in cover it up with some wet newspaper shreds and close the lid.

Worms eat about half their body weight each day and can double their population every few months.
After a year of so you will be able to feed off your kitchen wastes quickly, but to begin with be careful not to overfeed the bin. Feed the worms just ahead of what they are consuming.

I used to push aside the shredded newspaper topping to feed the worms and then recover the food with the same newspaper shreds. Now I make layers of food and newspapers. Once I have covered the last layer of newspaper with food again I add another layer of newspapers. It has been many years and my worms are large and the bin is well populated. Wastes go quickly. In a few years you could have 15.000 to 20,000 worms in your bin from your initial 1,000.
Compost worms will also help break down manure. My worms love my rabbit manure. They break down 2 cups in a few days. It is important to avoid manure from livestock that was recently wormed. Vermicide in manure will kill your compost worms too.

The order for the trays is to start at the bottom and work up. Once the 1st tray is full so that the wastes touch the bottom of the next tray begin filling the next tray. By the time the top tray is filled to the line the bottom tray should be broken down. Lift that tray out, dropping the middle tray to the bottom and the top tray to the middle. Put the broken down tray on the top, stir it a little to help aerate it, and leave the top off to encourage the worms to dive down into the lower trays. It will take several days of light exposure and a stirring once each day before the tray will empty of its worms. Once they’re gone you can harvest the casts. I always leave about a cup of castes behind in the tray to help encourage the worms to repopulate it. Add some kitchen wastes, wet newspaper, and cover it up again. It will be several months before you will have a tray of castes. You will be able to get worm tea much sooner than that. Once a week you should pour about 2 liters of fresh water on your worm bin. Make sure the spigot is open and you have a decent sized catch bottle beneath it. I leave the spigot on my bin open all the time.

There are just a few tips I want to give about this worm bin. When changing the order of the trays flip the top over and use it as a tray holder, then you will need just one more surface on which to place a tray while rearranging. Use opaque bottles in which to save worm tea. Don’t feed your worms citrus or onions. They will sour the bin. Don’t freak out when other types of creatures wind up in your bin. My bin houses some spiders and some other squiggly things. It’s compost after all. The bin should smell pleasant like soil. If it gets stinky or acidic you may need to add some garden lime, or slow down on the feeding, or pour in some water, or all of those. Your worms do best in temperatures from 50 to 90 degrees f. If you are going to put them outside they need to be in shade, and protected from rain and freezing. Egg shells are great for the worm bin although the worms don’t make them disappear. Crush the eggshells real well before adding them to the bin they will leak their calcium into the castes, but they will still be visible in the castes you use. If you are leaving for vacation feed the worms a good bit and add some fresh wet newspaper shreds, and leave the spigot open. They will be fine while you are gone. While your bin is establishing itself and you are generating more kitchen wastes than it can use freeze bags of kitchen wastes. When you need them thaw them out and put them in the bin. Food that has been frozen breaks down much more quickly, and will cover well when you have to leave for a few weeks.

Worm castings are a fabulous manure additive for your garden, potted plants, or your compost pile. I use mine as quickly as they are harvested in order to get the benefit of their microbial life. I use the castes with eggshells on tomato plants first although all worm castings have calcium in them from the worms’ digestive process. Fresh castings are sticky and so a little difficult to handle. I top or side dress my plants with them, just spooning them out around the drip line of the plant.

To buy some of my fresh worm castings click here.

Here is a link for Our Vital Earth where you can find distributors in several Florida towns for the Can O Worms worm bin. http://www.ourvitalearth.com/wonderworm-distributors.htm