The Story Of Lettuce The Frog

The Story Of Lettuce The Frog 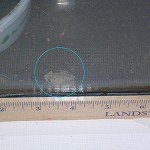 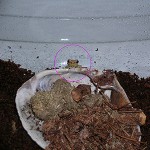 " Creeping Into The Food Dish" 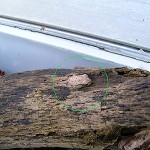 "Was Packed In Lettuce For The Return Trip"

"Back on Florida Soil"

Last month my husband and I packed up the dogs and jumped into the van and drove to Maryland. His Dad was in the hospital and we were needed there to help out a little. Ten days later it was time for me to go, and my husband needed to stay longer. My brother and his wife decided that my brother would ride back to Florida with me and the dogs. A couple of days after we arrived in Florida it was time for my brother to catch a plane home. In the morning before leaving for the airport I ran out the door with scissors and a zip lock bag. I pushed a half a pound of cut lettuce into the bag and sealed it. He packed it into his carry on bag and off we went.

That nite back at his home in Maryland my brother was washing lettuce for the salad the family would eat with dinner when a dime sized frog jumped onto his chest. After a brief interstate conference my sister in law and my neices made a terrarium habitat for the frog they named Lettuce.

I remembered that when we were children living in Maryland we would catch toads that lived in the window wells around our house, and my father would get them to eat pill bugs we found under rocks by offering the bugs to the toads from the end of his forceps. I suggested my neices find those same bugs for their new frog. Though it was still quite cold they were able to turn up rocks and find pill bugs and sow bugs to feed the frog over the course of the next few weeks. They discovered that Lettuce was a nocturnal frog. He slept all day and came out to feed at night.

A month later when my brother and his eldest daughter came to visit Florida they packed Lettuce the frog into a bag of organic lettuce, put the lettuce bag into her backpack, and that night Lettuce the frog was released back into the garden from which he came. He had traveled a total of 2,000 miles, spent several weeks in a terarium in a zone 7b town in February, and survived to return to the land of his hatching.

Lettuce the frog is probably a Cuban frog, not originally native to South Florida, but he is just one of the many predators who work my vegetable garden helping to keep the pest insect populations down. I see frogs like Lettuce in the crooks of collard plants by day keeping moist. At night they come out to eat. When we released Lettuce he jumped off the ground and right up into a collard plant.
The End